The Bank of England (BoE) left key interest rates unchanged following the conclusion of its monetary-policy meeting on September 13, 2017. The bank rate was left unchanged at 0.25 percent, as the members of the Monetary Policy Committee (MPC) voted by a majority of 7 to 2 to maintain the status quo. However, the hawkish statements that followed the MPC meeting sent the pound soaring to its highest level since the Brexit referendum in 2016. The committee also voted to maintain the stock of government and noninvestment-grade corporate-bond purchases funded by the central bank reserves at £435 billion and £10 billion respectively. 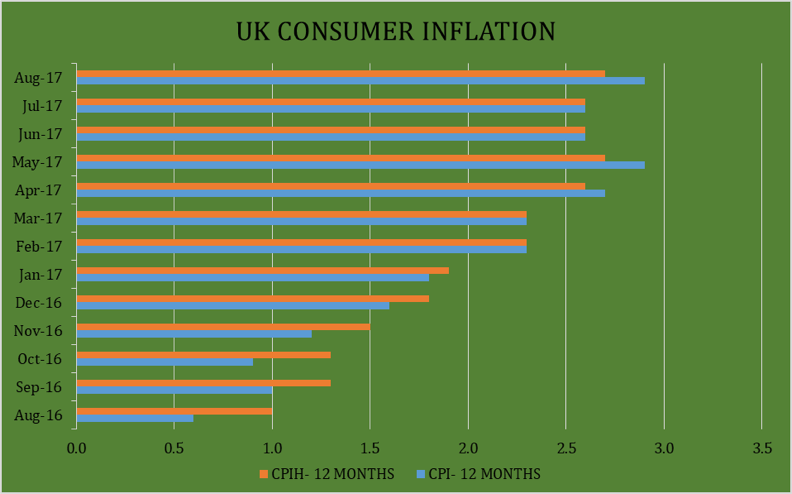 The dilemma in the United Kingdom is that inflation is rising far beyond the central bank’s target of 2 percent, as a depreciated pound sterling is leading to an increase in the retail costs of goods and services. The Consumer Price Index (CPI) reported by the Office for National Statistics (ONS) in the UK surged by 2.9 percent in August on a year-over-year basis from 2.6 percent in July, led by rising costs in fuel. The Consumer Price Index including owner-occupied housing costs (CPIH), a more comprehensive measure of inflation, increased by a more modest 2.7 percent in August from 2.6 percent a month earlier. The August figures are in line with the reported numbers in May of this year and the highest since April 2012.

Following are some of the observations of the central bank’s policymakers following the September meeting:

The Bank of England clearly stated that if inflation continues to rise and the economy is broadly consistent with the central bank’s August Inflation Report, the monetary policy will need to be tightened to a greater extent than what the market currently perceives to ensure that inflation returns to the bank’s target without affecting the broader job market. The BoE also stated that it would proceed by withdrawing some of the monetary stimulus in the coming months to bring inflation back to its 2-percent target.

The pound sterling settled 1.4 percent higher versus the dollar following the Brexit vote and rose another 1.45 percent in the following session to end the week at 1.3590, the highest since June 26, 2016. The UK currency has since corrected from its 15-month high and has been trading around the 1.3550 mark to the greenback. The pound sterling rallied versus the euro as well, gaining close to 2.5 percent in the last two days of the week to settle at 1.1378. The UK currency has had a good run versus the euro recently, rising about 4.5 percent in September after sliding to an 11-month low of 1.0740 in August.

UK stock markets led by the FTSE 100 Index retreated after the surprise tip off made by policymakers. The primary UK index slipped more than a percent on Thursday, September 14, to end the week at 7215.47, down more than 2 percent from the previous week’s close.

The FTSE has been underperforming relative to most of its global counterparts since hitting all-time highs in June of this year. The index is currently down by more than 4 percent from its peak, and if the policymakers follow their statements with actions, the stocks markets are certainly bound to slide further.

The Bank of England was left with very few options in terms of altering its monetary policy since it last cut interest rates from 0.50 to 0.25 percent in August 2016 following the Brexit vote. The rates prior to August of last year had remained unchanged since March 2009, when the BoE began an interest-cutting spree after the UK economy slipped into recession following the global financial crisis. However, from February 2017, inflation has consistently remained above the central bank’s target of 2 percent, giving some room for the bank to act—although the UK economy may not be performing at its best, and considerable risks from formally exiting from the EU remain.

But the UK’s central bank is definitely setting its sights on lowering inflation by considering rate hikes in addition to withdrawing stimulus without hurting the ongoing economic growth in the country. Markets will be closely watching developments on the economic front as well as statements from BoE policymakers for hints about the possible timing of such moves.