According to the policy statement, the central bank indicated that interest rates will continue to remain at present levels for an extended period of time, although they did not mention what the specific timeframe would be. As for non-monetary policy measures, the ECB confirmed that the monthly asset purchases will continue until the end of the existing calendar year or until inflation is brought in line with the bank’s projected target. The ECB currently runs a monthly net-asset purchase program of €60 billion. 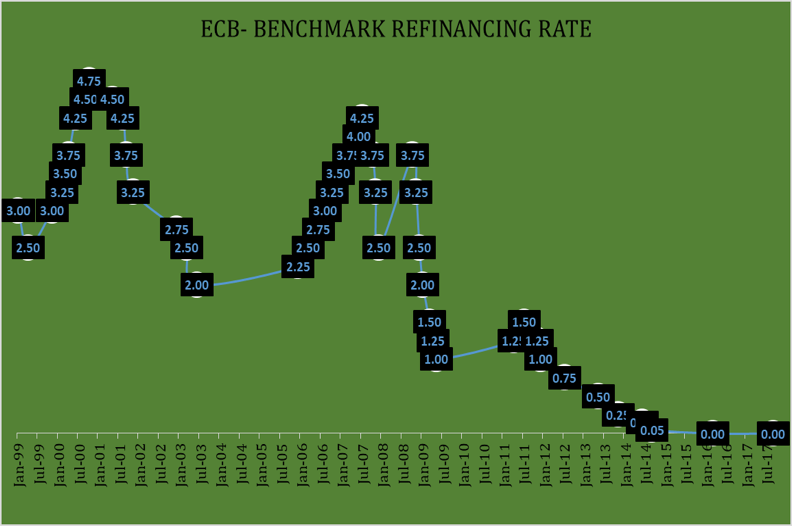 In the press conference that followed the monetary-policy meeting, the president of Europe’s central bank, Mario Draghi, stated that interest rates will remain at current levels well past the end of the bank’s asset-purchase program, carried out along with reinvesting principle payments from maturing securities. The president went on to announce that the broad-based economic expansion in the eurozone accelerated more than expected in the first half of 2017; however, recent exchange-rate volatility could lead to uncertainty in price stability over the medium-term. The ongoing economic expansion has not translated into higher consumer prices, with inflation remaining subdued, and accommodation in the monetary policy is necessary to drive inflation higher. He also said that the central bank stands ready to raise the size and duration of the asset purchases if the economic outlook becomes less favourable.

The key points stated by Draghi in the press conference with reference to the economic activity in the eurozone are highlighted below:

The ECB is very clear that it will not alter its monetary policy unless inflation rises close to the bank’s target of 2 percent. The dovish stance following the September monetary-policy meeting puts to rest the hawkish statements from some of the policymakers prior to the July meeting and diminishes market interest in the forthcoming policy meeting scheduled for October.

After all is said and done, it is very clear that interest rates are not going to change anytime soon, at least not until mid-2018. However, the big question facing market experts is: “Will the ECB signal an end to asset purchases when they meet in December, or will they continue with the current easy-money policy?”

The governing council of the European Central Bank next meets on October 4 for non-monetary measures followed by the monetary-policy meeting on October 26.

What’s in Store for the Chilean Peso?