The Reserve Bank of Australia in its seventh monetary policy meeting this year decided to leave the benchmark interest rate, or the cash rate, unchanged at 1.5 percent. The move was in line with market expectations, and according to the RBA’s statement, it was based on the situation of the financial markets in the country; interest rates are likely to remain at current levels for the rest of the year, and any possibility of a rate hike would only be looked at towards mid-2018. The key interest rates in Australia have remained unchanged since August 2016.

Following are the key highlights of the RBA’s press release and the quarterly monetary policy statement on the current condition of the Australian economy and the outlook for the future:

The following chart highlights the key interest rates in Australia since January 2011. 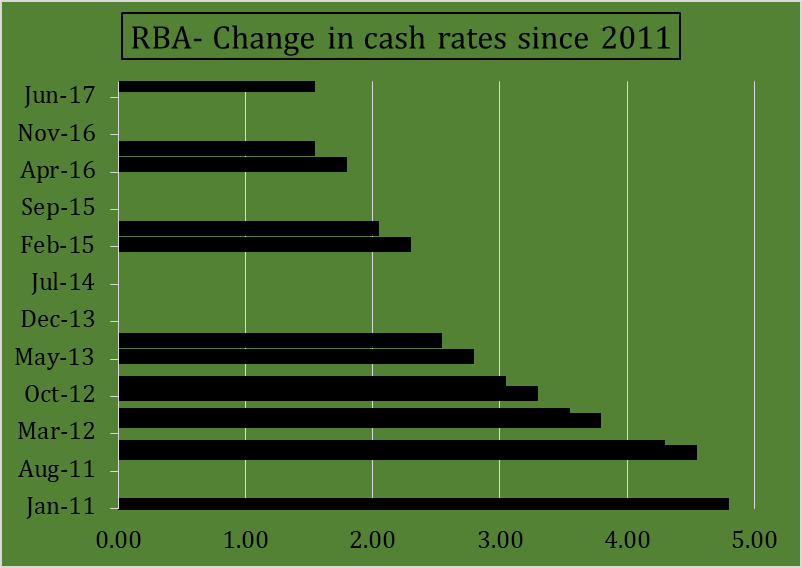 Gross domestic product (GDP) growth in Australia expanded at a slower pace of 0.3 percent in the quarter ending March 31, 2017, compared to solid growth figures of 1.1 percent in the previous quarter, as exports shrunk by 1.6 percent and dwelling investment dropped by 4.4 percent, offsetting the rise in mining investment, which increased 3.7 percent during the first three months of the year. Compared to the year-on-year period, GDP growth expanded at 1.7 percent. The labour market continues to shine with around 165,000 full-time jobs created in 2017, leading to a fall in the unemployment rate, which declined to 5.6 percent by the end of June 2017. The unemployment levels in the country are currently at 0.5 to 0.75 percentage points above the central bank’s evaluation of full employment. However, the rise in employment has not resulted in a parallel wage growth, which has remained below 2 percent year-on-year, according to the wage price index (WPI)—more or less in line with some of the other major economies globally. The national minimum wage rate in Australia is decided by the Fair Work Commission (FWC) and the minimum wage per hour is fixed at $18.29 from July 1, 2017.

The Australian equity markets have largely underperformed their global peers, led by declines in the banking sector after the Parliament passed the “major bank levy bill 2017” for banks with a liability of more than $100 billion. The bill, which was passed in June 2017, came into effect from July 1, 2017 with the government expected to rake in about $1.5 billion in taxes from the levy every year. In addition, the financial sector was downgraded by credit-rating agencies Standard & Poor’s and Moody’s due to the large accumulation of household debt, and this has led to an overall tightening in bank lending, thereby putting the brakes on fresh loans.

The Australian dollar, which was trading above 0.8000 to the greenback, slid about 2.5 percent in the two weeks following the RBA’s monetary-policy decision. The currency pair has since recovered about half its losses and was seen trading in the 0.7900-0.7950 range.

Interest rates are begging to be risen, the current house price rises are unsustainable and this will be yet another CB who react to a price correction rather than take the necessary moves to have a soft landing.