In March 2018, US President Donald J. Trump announced across-the-board tariffs on steel and aluminum imports, with a 25-percent import tariff on steel and 10-percent on aluminum. In administering the tariffs, he held that the national security of the United States was being hampered by a fall in the production levels of domestic steel and aluminum. A similar exercise carried out in the past to prop up the US steel industry showed that tariffs actually failed to revitalize domestic producers. On the contrary, they led to a steep rise in inflation in the country and retaliation from the countries affected by the tariffs.

The tariffs are in response to the deteriorating situation of the US steel industry. Employment in the industry has fallen from 650,000 workers in the 1950s to around 150,000 in 2017, with many of the closed mills in swing states such as Pennsylvania.

Dumping concerns have also prompted the move. Chinese producers have been subsidizing production of the metal while violating industrial trade rules, flooding US markets with low-cost steel and creating price wars. While the previous administrations in the US have provided protection from dumping through limited quotas or tariffs, President Trump’s imposition of a steel-tariff plan covers a broader range of countries.

According to Statista, employment in the US iron-and-steel industry stood at 147,000 in 2017. While the tariffs may have a positive impact on job creation in the near-term, the markets are echoing negative sentiment as job creation in the sector could be very small compared to job loss in others in the event of a trade war. In addition, the US presently imports four times more steel than it exports and relies on the commodity from more than 100 nations across the world. A tariff would not only up the cost of imports, it would also lead to a surge in inflation on a number of secondary products associated with steel and aluminum.

So, how will the steel tariff impact domestic producers?

To begin with, the tariffs are likely to impact employment figures. While there could be job gains in the near-term as the domestic steel sector looks to expand production, related industries that rely on usage of steel will face steep increases in costs, not to mention losses, if they have to rely on steel made in the US.

According to government data, the sector has witnessed job losses of around 50,000 in the last decade and a half. However, the likelihood of costly imports may result in the construction and manufacturing sectors taking a hit as they face increased costs and lower profits if they have to rely on domestically produced metal. Additionally, domestic demand for steel has also been on the decline. The consumption of steel in the US has fallen by almost 50 percent since the 1970s, not to mention that the steel sector in the US is now a fraction of what it was during the decades leading up to the start of the millennium. Government data also shows that domestic production of steel has fallen from 102 million metric tons in 2000 to 82 million metric tons in 2017. As a result, employment has also fallen dramatically.

Then there are the other sectors that depend on steel, such as automotive, manufacturing and construction, which are likely to see declines in profitability in addition to job losses as higher prices lead to rises in raw-material costs. However, for domestic steel producers, it looks to be a positive move on the face of it, considering that the market for 100 million metric tons of imported steel will be more competitive if US companies can chip in, thereby opening avenues for higher sales and greater profitability. 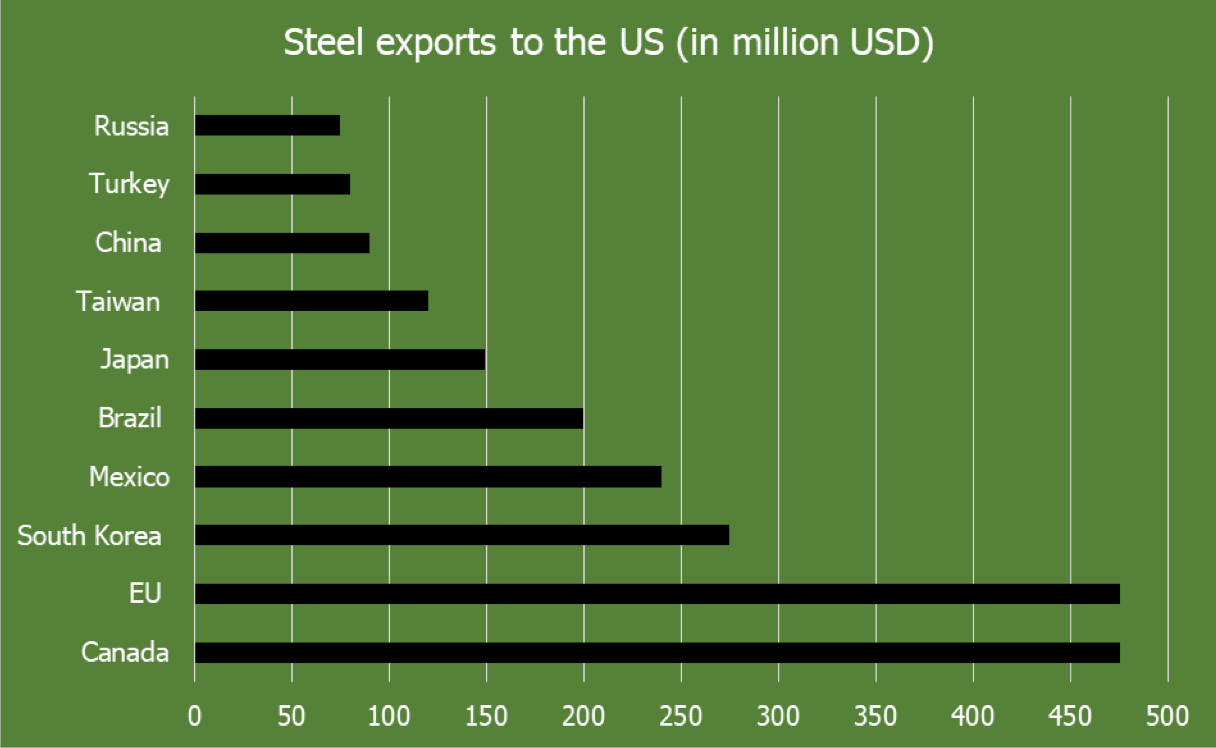 Source: US Department of Commerce

New trade wars are likely to emerge post the introduction of steel tariffs. Key US allies have also been hit with higher costs. China is presently one of the larger exporters of steel to the US—but other countries such as Canada, South Korea and Japan are in the top 10. Canada and Mexico are exempt from the steel tariffs, which indicates that competitors such as the European Union will face new restrictions in the US market.

A closer look reveals that apart from China, South Korea and Brazil—which are key exporters of steel to the US—are also likely to be impacted since they now face the prospect of higher tariffs. However, Canada, which is exempt from the tariffs, may take first place as the largest exporter of steel to the United States as it is already at the top.

The Dow Jones Industrial Average index has been seesawing ever since the tariffs were announced amidst concerns that they may have ripple effects on other sectors. In addition, the sanctions are expected to impact global corporations as the move is protectionist and could be challenged in the World Trade Organization (WTO). Also, if import tariffs could improve the situation for US steel producers, the big question is:

Why are domestic investors negative?

For instance, shares in steel producer Nucor Corp fell 2.7 percent, United States Steel Corp was down 2.9 percent, Steel Dynamics, Inc. saw a fall of 2.8 percent, and a whopping 4.1-percent fall was seen in the case of AK Steel Holding Corp following the announcement.

Clearly, the US steel tariffs will have negative repercussions for the markets and the broader global economy in the days to come.

Review of the Brexit Negotiations So Far–Winners and Losers