After Conquering the Markets in 2017, Will the Bitcoin Frenzy Persist in 2018?!

If cryptocurrencies were to be branded as the most recent addition to the existing financial instruments, they would effortlessly take over the podium as the best-performing asset class in 2017. Categorized as either standalone virtual currencies or tokens issued on the ethereum blockchain, crypto-assets, which were once considered anything but an investment idea, took on the combined might of the traditional asset classes in 2017, delivering massive returns. Analysts believe that investors are gradually beginning to pay more attention to these assets since they are unrelated to a country’s economy—unlike fiat currencies and other traditional forms of money exchange, which are extremely vulnerable to internal and external economic shocks—leading to the popularity of cryptos such as bitcoin and a few others.

Coming to the most popular cryptocurrency: bitcoin, the virtual currency, was launched following the global financial crisis in 2009 for less than a dollar. The currency has since recorded one of its best annual performances since inception in value terms, settling at $13,860 at the end of 2017. Beginning the year at around $997, bitcoin experienced abrupt volatility in the last quarter as the currency witnessed immense buying interest in the wake of escalating tensions in the Middle East and East Asia, pushing investors to look at the virtual currency from the perspective of an alternate asset class with barely any accountability. The crypto rose from around $4,400 at the end of September to within striking distance of the $20,000 mark in December, before profit-booking crept in, leading to a 60-percent drop from its all-time high. However, for the year, bitcoin gained by more than 1,400 percent, representing a massive surge in demand for the digital currency. 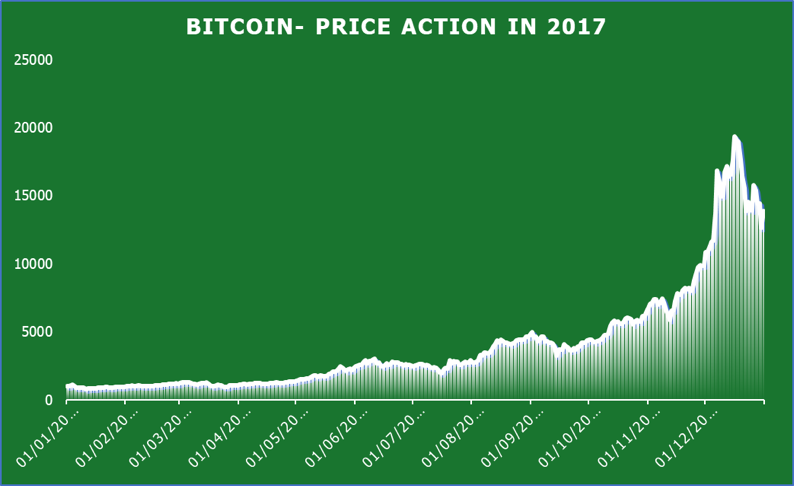 Market experts are mixed in their analyses of cryptocurrencies in general and bitcoin in particular. Pessimists view the rally as a bubble waiting to explode, and their basis is that every tradable financial instrument has a monetary value that can generally be used in business transactions. However, bitcoin cannot be placed in the same category since it is not legal tender and has very few uses outside its trading zone, thereby making investors holding the currency that has zero value extremely vulnerable to potential risks.

Those in favour of bitcoin and other cryptocurrencies claim that the digital currency has an intrinsic value associated with its technology, which will eventually be used in a wide range of applications in the financial-services industry. Although currently not backed by any government, cryptocurrencies are very different from fiat currencies, the values of which are inflated due to the constant money supply provided by central banks—compared to a specific number of bitcoin in circulation that is fervently supported by individuals and traders, in spite of its high volatility and risks associated with hacking.

In spite of all the news surrounding cryptocurrencies, they are definitely here to stay. And according to a recent report from the Royal Bank of Canada, the market size for cryptocurrency mining will grow only bigger with mining equipment for bitcoin expected to lead the way, with a market size of more than $4 billion; while ASIC (application-specific integrated circuit chip)-mined cryptocurrencies such as bitcoin cash are expected to have a market cap of around $350-$450 million. Likewise, GPU (graphics processing unit)-mined coins such as ethereum and monero, which also performed extremely well in 2017, could attract about $2 billion in market size.

The popularity of bitcoin has also led to the launch of its futures contract on two of the largest US exchanges—the Chicago Board Options Exchange (CBOE) and the Chicago Mercantile Exchange (CME)—in December of last year. The currency, with four tradable cash-settled contracts a year, will give investors the much-needed impetus in terms of transparency, price discovery and the ability to transfer counterparty risk efficiently, especially with hackers gaining access to cryptocurrency accounts, leading to some of the crypto platforms forcibly shutting down after incurring millions of dollars in losses. But on the flipside, participants using bitcoin as a money-laundering tool may no longer be able to do so in the wake of government regulations that are likely to kick in across Europe and the United States. Although nothing much has actually taken effect on the ground as of now, once the regulations come into effect, investors in all probability will begin to shift their investments to the other popular cryptocurrencies, such as ethereum, litecoin, ripple, stellar and dash.

US Dollar Inches Higher versus the Majors Ahead of Fed Meeting

Risks and Rewards of Investing in Cryptocurrencies in 2018

Brexit Will Lead to a Wider than Expected...

Risks and Rewards of Investing in Cryptocurrencies in...

US Dollar Inches Higher versus the Majors Ahead...

If Done Properly, Venezuela’s New Cryptocurrency Could Be...