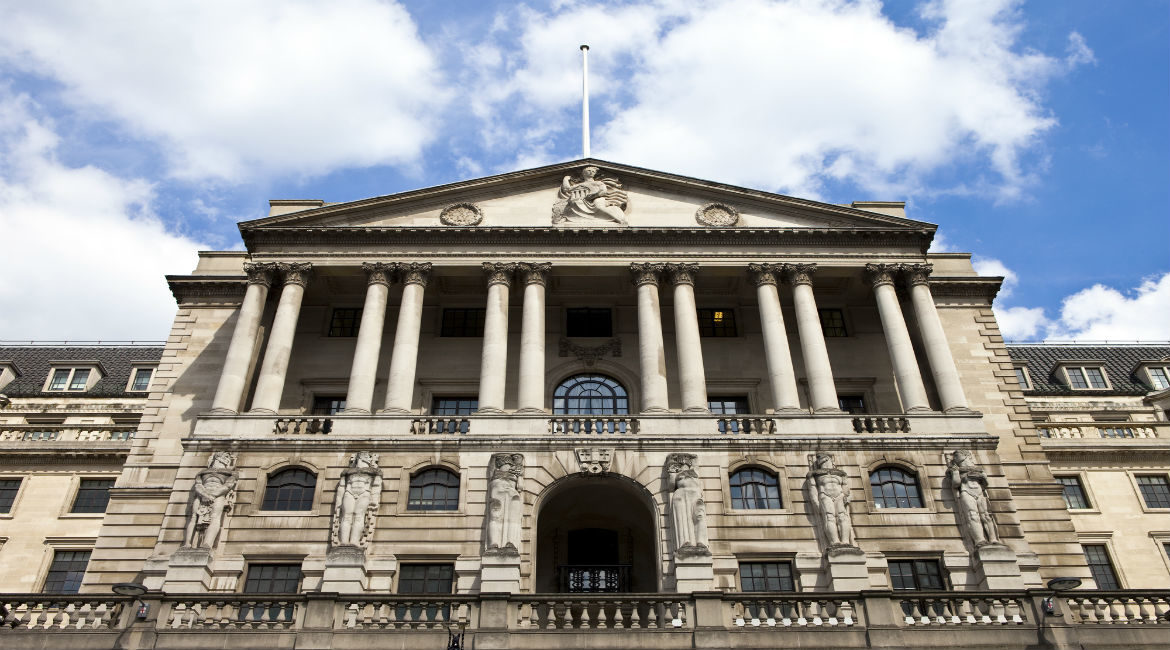 The UK economy slowed in the first half of 2017; so where does that leave the Bank of England?

The UK economy is struggling in the aftermath of the historic Brexit referendum on June 23, 2016, in which the country voted to maintain its sovereignty and exit from the European Union. As the outcome of the referendum became clear on June 24, 2016, the pound sterling was the first casualty, as the UK currency slid to 1.3700 after settling close to 1.4900 the previous day, plunging more than 8 percent in a single day.

As for the performance of the UK economy, the impact of Brexit was not felt immediately, as growth continued to expand at 0.5 and 0.7 percent in the third and fourth quarter of 2016 respectively, better than the first-half average of 0.4 percent. However, the economy started receiving the aftershocks in 2017. Gross domestic product (GDP) growth in the United Kingdom during first-quarter 2017 recorded a massive slowdown at 0.2 percent, after rising to 0.7 percent in the last quarter of 2016, the slowest quarter-over-quarter growth since the first quarter of 2016. To compound the awkwardness, UK economic growth was compared to the rest of the countries in the European Union, in which the lowest first-quarter 2017 GDP numbers were registered by France and Greece at 0.4 percent each. 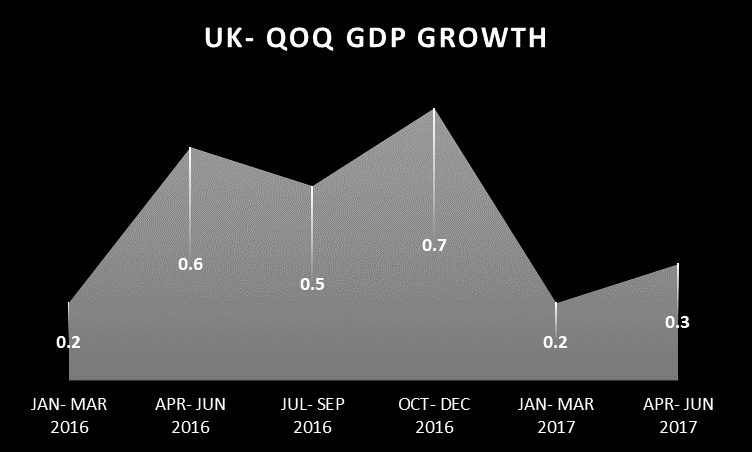 Following its dismal first-quarter performance, the UK economy continued with its sluggish growth, with the Office for National Statistics announcing the second-quarter GDP growth number of 0.3 percent. The data, released during the last week of July 2017, showed that the UK economy ended the first half of 2017 with growth figures of 0.5 percent, slowing down from the 0.8 percent reported in the first half of 2016. The main concerns leading to lower growth stem from a depreciating pound sterling, which dropped close to 20 percent following the referendum. The weaker currency has raised the costs of imports, pushing up consumer inflation; and with income not keeping pace with rising prices, consumer spending has weakened, hitting consumer confidence hard.

The Consumer Price Index (CPI) in the UK averaged about 2.5 percent in the first half of 2017, compared to the 2016 average of 1.7 percent. Except for January of this year, during which inflation remained below 2 percent, the monthly index has seen a steady rise during the rest of this year, peaking at 2.9 percent in May, the highest since June 2013. 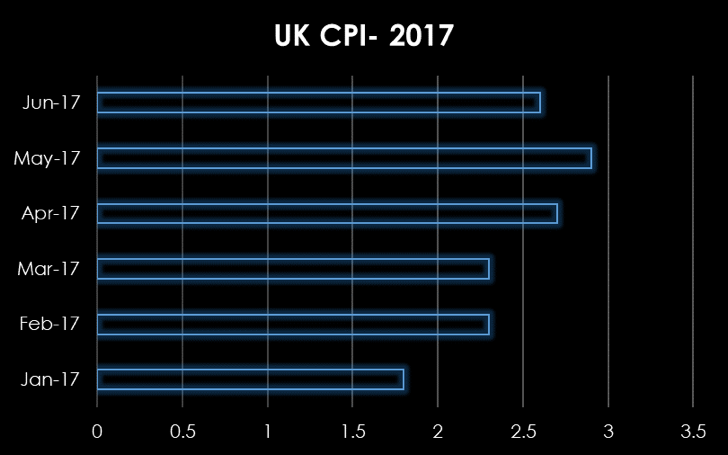 The Bank of England (BOE) in its monetary policy meeting ending August 2, 2017, voted with a 6-2 majority to leave key interest rates unchanged at 0.25 percent. According to its assessment of the economy, the central bank expects GDP growth to remain sluggish, as a weak pound sterling pushes consumer inflation higher, tightening household spending, thus putting the brakes on retail consumption. The BOE cut its UK growth forecast to 1.7 percent from 1.9 in 2017. The bank also anticipates consumer inflation to rise to 3 percent in October from 2.6 percent in June 2017, higher than the bank’s inflation target of 2 percent. However, the biggest plus is the unemployment rate, which has remained below 5 percent, and policymakers expect wage growth to moderate in line with inflation over the next few months.

The Bank of England last experimented with interest rates in August 2016, when it slashed its benchmark rate from 0.5 to 0.25 percent; and at the press meet following the most recent monetary-policy meeting, Governor Mark Carney sounded hawkish as he stated that there could be some tightening in interest rates during the next three years. The BOE currently holds 435 billion pounds in government bonds and 10 billion pounds in investment-grade corporate bonds.

The UK government triggered Article 50 on March 29, 2017, giving the country two years to completely exit the European Union. The uncertainty in the role of the UK with its European trading partners has caused a slowdown in business investment. And unless there is more clarity on the outcome of the talks, the UK economy could continue to remain sluggish. The biggest beneficiaries, however, could be the pound sterling, which is likely to reverse its losses after crashing to its lowest level versus the greenback since 1985, and the UK stock markets led by the FTSE, which continues rallying to new highs.

The Bank of England may still be a few months away from tightening interest rates in the country, but its policymakers sound the most hawkish compared to their counterparts in the United States and Europe.

When Brexit kicks in, really kicks in, there is going to be a bloodbath run on the pound. These next couple of quarterlys are meaningless until that day.