Will US Corporate Earnings Drive Stock Markets Further into the Green?

2017 has been a tremendous year for US corporates, but has it been enough to push stock prices higher?

Corporate America is in high spirits on the back of solid earnings growth in 2017. More than 75 percent of all listed companies on the S&P 500 Index (SPX) reported higher than expected EPS (earnings per share) growth in the second quarter, with about 10 percent of the companies reporting EPS in line with market expectations and the rest stating earnings below the median estimates of analysts. The broad index, which comprises 500 large-cap companies, accounts for about 80 percent of the total market capitalization of the US equity markets.

Going into September, the second-quarter earnings growth of all the companies listed on the S&P 500 expanded at more than 10 percent, with almost all of them reporting their second-quarter results. Based on the outcome of the corporate results, the SPX is on target to post double-digit earnings growth for the second quarter in a row, the first time in nearly six years.

Looking at the sector-wide performance of Corporate America in the second quarter of this year, more than 80 percent of the companies in information technology, healthcare and the financial-services space reported higher than estimated EPS growth, closely followed by the consumer staples industry producing food, beverages, household articles, while about 60-70 percent of the companies listed under the energy, utilities and materials sectors reported better than expected EPS numbers.

The following chart highlights the performance of the three major US indices: Dow Jones, NASDAQ Composite and the broader S&P 500 from January to August 2017. All the indices have rallied to new highs in 2017, generating substantial returns in the last eight months. The best performer has been the tech-heavy NASDAQ with gains of 19.4 percent, in line with the EPS estimates stated earlier. The S&P gained about 11 percent in 2017, followed by the Dow in third place, rising more than10 percent in the last eight months.

US large-cap stocks returned more than 9 percent in the first half of 2017, the most since 2013, and although prices are close to all-time highs, analysts are of the opinion that valuations are not very expensive for a majority of these stocks, as stronger earnings upped the price-to-earnings ratio, which has generally remained above average for quite a few years.

From July 2016 to the end of second-quarter 2017, more than 80 percent of the companies listed in the S&P 500 declared dividends, as stable oil prices, low wage growth and a weaker US currency have all added to the overall corporate profits.

The following illustration provides an analysis of the performance of the top five US companies in terms of market capitalization in 2017. All the companies except ExxonMobil provided positive returns, with Apple Inc. being the best performer with ROI (return on investment) exceeding 40 percent in the first eight months of the year, followed by Amazon at 30 percent, Microsoft at 20 percent and Berkshire Hathaway at 11 percent. ExxonMobil was the worst performer, with the stock declining more than 15 percent since the start of the year. 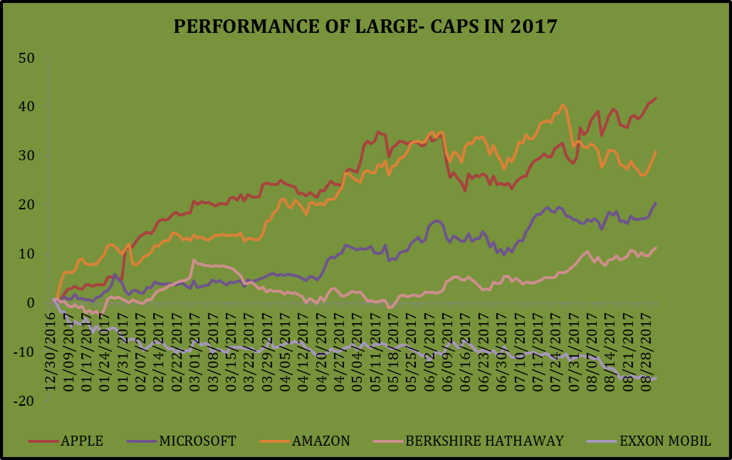 According to data from various sources, loans to private-sector companies in the United States at the end of July 2017 was around $2,106 billion, rising close to 0.3 percent in the first eight months of the year. However, the reported loan growth was much lower compared to the 2016 figures, during which loans to private-sector enterprises rose by around 6 percent for the entire year.

According to the Federal Reserve’s statistical data on the Financial Accounts of the United States, non-financial business debt stood at $13.7 trillion at the end of first-quarter 2017, rising more than 6 percent on a year-on-year basis, while the total outstanding debt with domestic financial institutions was at $15.7 trillion. The net wealth of the United States at the end of the first quarter was pegged at $86 trillion, rising 2.7 percent from the last quarter of 2016.

According to the Global Financial Stability Report released by the IMF (International Monetary Fund), a large number of US companies servicing their debt could be in trouble if the Fed continues to raise rates. In recent months, the yield on US corporate bonds, especially investment-grade securities, is a little more than 100 basis points compared to the yield on government debt, dropping within striking distance of the lows seen post the 2008 financial crisis.

The Federal Reserve is meeting later this month, and with inflation below its targeted 2 percent, all eyes will be on how the US central bank chalks out its asset-sale program. With a balance sheet comprised of close to $5 trillion in debt instruments, of which about $1.8 trillion is in the form of mortgage-backed securities, any statement providing clarity on the sale of its assets will most likely trigger another rally in stocks, as investors will look to exit bond markets, especially the ones with lower credit ratings, to capitalise on the upsurge in corporate earnings.

Populist Mexican Fervor Will Likely Lead to a Facelifted NAFTA

What’s in Store for the Chilean Peso?