British Pound Still Under Pressure One Year after Brexit Vote

The morning after Friday, June 24, 2016, Europe awoke in shock. Against all expectations, one of her 28 members was going to start a divorce procedure. At the end of an intense campaign, during which pro-European MP Jo Cox was shot dead in Birstall, the Brexit camp led by former Mayor of London Boris Johnson was declared the winner with 51.9 percent in favour of Brexit. Mobilization was at its peak with a participation rate of 72.2 percent. But division was also intense: in England and Wales, 53.4 percent and 52.5 percent of votes respectively were favourable to Brexit, while Scotland (62 percent) and Northern Ireland (55.8 percent) were widely against Brexit.

Political consequences were harsh: David Cameron, the prime minister, announced immediately his resignation. While it was naturally conceivable that Boris Johnson would be appointed to his post, it was eventually Theresa May who was to lead the country.

But consequences for the foreign-exchange market and British pound have been extreme.

On forex (foreign exchange) markets, the excess volatility of the British pound appeared immediately and does not seem to have calmed down one year after. The day after the referendum, global stock markets started their sessions with huge bearish gaps. The pound sterling was aggressively sold and reached a 30-year low against the US dollar, but also against gold and the yen, which took advantage of the situation.

On equity markets, buyers did not abdicate and somewhat benefited from the devaluation of the sterling. But the British pound had been heavily weakened. 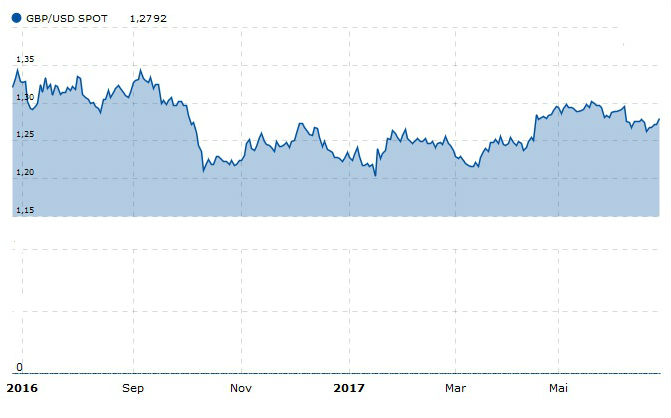 The Bank of England intervened to sustain the deflationary risk, but inflation appeared.

Already worried in 2016 about deflationary risk as well as a limited recovery, the Bank of England decided during the summer of 2016 to lower the level of its key rates to new historic lows. Its refinancing rate, the main policy rate, has since remained at 0.25 percent. Governor Mark Carney and his monetary-policy committee sent a clear message: the Bank of England will do its best to counter this volatility, harmful to the British economy. Similarly, the governor of the central bank, who had pinpointed the “negative consequences” during the campaign, hoped to avert the risk of an economic crisis.

But inflation appeared again, leaving the Bank of England embarrassed. The Brexit victory has had many consequences for the British economy. The most important is the comeback of inflation. Supported by the fall in the British pound and thus by the sharp increase in British exports, the overall inflation rate has increased over the past 12 months from 0.6 percent to 2.9 percent. This sharp acceleration puts the Bank of England again in a delicate situation, torn between risks linked to Brexit and to hyperinflation.

GDP (gross domestic product) growth remains sluggish at around 2 percent since the referendum, while it was more than 3 percent in January 2015. On the one hand, GDP can be boosted by the depreciation of the pound sterling; on the other, uncertainties and the lack of visibility linked to Brexit are slowing down economic activity.

Almost a year later, other decisive legislative elections were set up by Prime Minister Theresa May, just before conducting the exit negotiations. The Conservative Party won 317 out of the 650 seats available in Parliament, and the government lost the absolute majority. Theresa May is not any more in a strong position for the exit negotiations, which began on June 19 in Brussels.

The British pound has sunk a little more; whereas, by reverse correlation, the FTSE 100 Index has been progressing. And negotiations have started with a focus on three main topics:

The deadline for a draft joint agreement is October 2018. The agreement should be implemented by March 2019 at the latest.

What is the future for the British pound?

One year after the Brexit vote, the pound sterling never recovered its pre-referendum value against the US dollar. GBP/USD: the exchange rate dropped to an inverted polarity-reversal threshold at $1.2610. A target between $1.30 and $1.33 could be possible, taking into account the USD’s current difficulties.

EUR/GBP: the exchange rate not only regained its pre-Brexit level, it has since stabilized under resistance at £0.8870. It could be possible that it will return to a level around £0.86 then £0.83 in the long-term.

In conclusion, the Brexit referendum and the unpredictable results of political elections have created an additional economic pressure and high volatility in the British pound. The British pound could technically have a medium-term upside potential, under the condition that the “hard-exit” scenario is avoided, and the process of the negotiations between the United Kingdom and the European Union goes smoothly.

Bitcoin Exchange Rate Is at Its Highest

Review of the Brexit Negotiations So Far–Winners and...